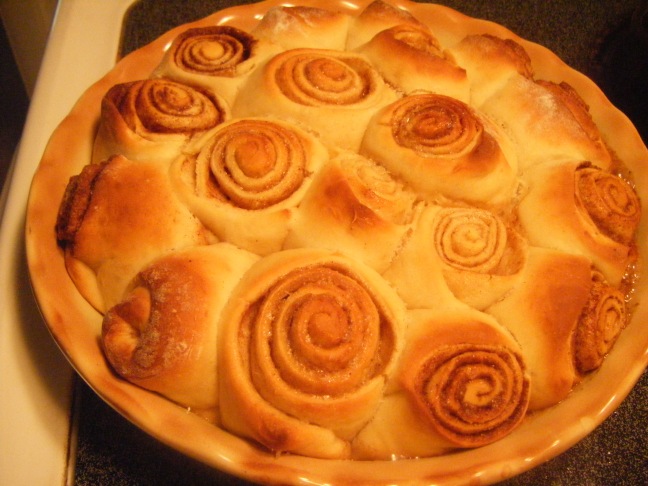 Cinnamon buns are a breakfast classic at the end of the week. Though I prefer to call this recipe morning buns. I had a housemate who hated cinnamon, so I used to make two flavors every time. One batch would be the more classic cinnamon and sugar, where the other would be a fun cinnamon free variation. This is a habit I’ve kept up through the years, and the results have been delicious.

DIRECTIONS:
1)  Combine in a mixer, the yeast, water, sugar, and salt.
2) Add in the two eggs and milk and slowly begin beating it together.
3) Drop in the margarine in chunks, and then pour in the flour bit by bit until a dough is formed.

4) Set the mixer to 2nd setting and beat for 4 minutes to develop the dough structure.
5) Let the dough rise for 1.5 to 2 hours. 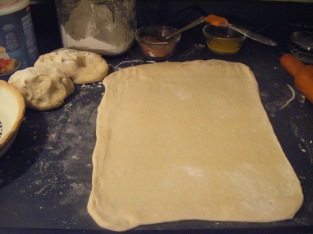 6) Split the dough into halves or thirds.
7) In a bowl, combine white sugar and cinnamon. In a second bowl, combine brown sugar, all spice, and a touch of nutmeg.
8) Melt the butter in a bowl.9) Flour the counter and use a rolling pin to roll out the dough. Don’t over roll, but make sure its in a nice square.
10) Brush the the butter over the dough. Sprinkle with the sugar mixture of your preference.

11) I like to add a sprinkling of raisins with the brown sugar mixture.
12) Roll the dough from the back towards you.
13) Slice the roll in 1/2 to 1 inch pieces and place in the pie dishes.
14) You don’t want to over crowd the dishes, but I accidentally had one of my pie pans in use so I did over crowd into two instead of three. You can see the result in the pictures!
15) Turn on the oven and let the dough do a short second proof. By the time the oven is heated, the buns should be ready to go into the oven.
16) Bake for 15-25 minutes or until the tops begin to brown/become golden!

One thought on “Morning Buns”