We like to have non traditional Thanksgiving with traditional flavors thrown in! Since it is just the two of us for Thanksgiving, we like to experiment and have a little fun. Last year, we did turkey burgers since we were still unpacking from our move. This year, we decided to do turkey burgers again, or rather turkey sliders! We had three flavors of sliders: cranberry on jalapeno cornbread buns, mashed potato and gravy, and pepperoni pizza. If you are wondering about the pizza flavor, its because when i was a kid I used to beg for pizza instead of Thanksgiving dinner because I liked it better. My husband wanted to honor my weirdness with its own slider. 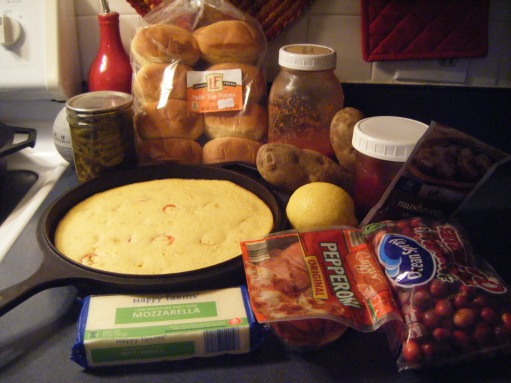 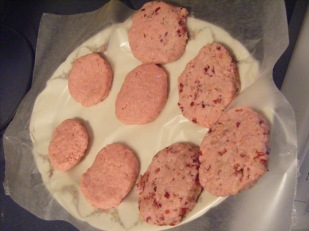 1) Freeze the ground turkey and then cut it into chunks. Grind half of it as is. Then sprinkle lemon zest over the other half of the meat.
2) Grind the second half of the meat with a handful of cranberries.
3) Shape into four plain patties and four cranberry patties.
4) Cut up the potatoes and place them in a pot of water, bringing it to a boil.
5) In another pan, combine about a 1/2 cup of canned tomato with minced garlic, and the herbs. Cook over medium low until it thickens up.
6) In a third pan, mix together the water and the mushroom gravy packet since there are no drippings to make actual gravy from.
7) In a fourth pan (and last for right now, you only have so many burners!) combine half a stick of butter with three to five cloves of minced garlic over low heat so as the butter melts it takes on all the garlic flavor.
8) When the potatoes are soft, drain them. Add a dash of milk and begin mashing with the potato masher by hand. When the butter is thoroughly infused with garlic, add it to the potatoes. 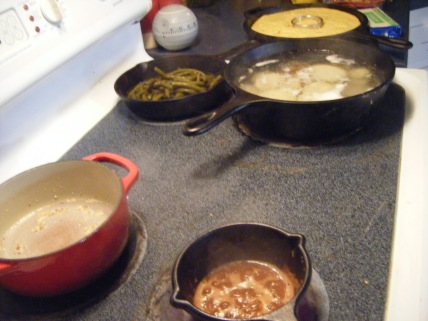 9) Using a round cookie cutter, cut out either pieces of jalapeno cornbread.
10) On a tray or cutting board, lay out the potato buns and the cornbread buns.
11) Slice some mozzarella and add it and pepperoni to the board as well.
12) Scoop some sauce into a small bowl and some of the potatoes into a small bowl as well.
13) Pour out just a sample of gravy, as well as salt, pepper, and sage.

14) Let the rest of the gravy and potato stay warm on the stove.
15) On the burner that had been cooking the tomato sauce, put out a new pan and fill it with dilly beans to get warming.
16) Head out to the hot grill and start cooking the mini turkey patties  with a sprinkle of salt, pepper, and a pinch of sage on each side. Also put the buns on the grill to warm and toast slightly.
17) Assemble the completed sliders as follows: potato bun, turkey burger, tomato sauce, mozzarella, pepperoni, potato bun/ potato bun, turkey burger, garlic mashed potato, gravy, potato bun/ cornbread bun, cranberry turkey burger, cornbread bun.
18) Plate the dilly beans, mashed potatoes, gravy, and cranberry sauce and put on the table.
19) Sit down with your drink of choice and enjoy a Thanksgiving slider feast!

It may seem like a lot of steps, but when you have two people working together it goes really fast!
Advertisement